The Fuzzy Math of GDP

By John Tammy at Forbes

It’s not a widely known, but in gross domestic product (GDP) terms, President Jimmy Carter presided over one of the longest and most expansive periods of economic growth in postwar history. Most readers would say the latter can’t be, that the ‘malaise’ president delivered only contraction and misery, but GDP said otherwise.

Of course, the fact that GDP registered growth is the first clue that it’s a more-than-worthless number. Diane Coyle, author of a new book GDP: A Brief But Affectionate History, wouldn’t agree that the number is worthless, but she does acknowledge that it does not measure human wellbeing or welfare. No it doesn’t, and while Coyle doesn’t hide her bias in favor of the hubristic conceit that says economists can credibly measure country economic activity, her book is still an important read for, if nothing else, revealing to readers just how unwittingly fraudulent the practice of economics is.

For those who don’t already know, gross domestic product (GDP) is the standard measure of the size of a country’s economy, and depending on whom you speak to, it carries with it great importance. When a growth deficit called into question the ability of Greece’s government to pay its debts, the country’s GDP loomed large according to Coyle; the irony there that Greece’s borrowing capacity was allegedly decided by a “handful of people” in a “dusty room” in the suburbs of Athens attempting to divine its output. You can’t make this up.

Yes, it’s true, the economics profession believes that country economies comprised of millions, and sometimes billions of individuals, can be measured. No doubt GDP in the U.S. is calculated with quite a bit more sophistication than in Greece, but the naive arrogance underlying the statistic remains for all to see. A profession that was largely blind to the economic crack-up taking place inside Iron Curtain countries back in the ‘70s (GDP signaled actual growth) still thinks unimaginative office drones in Washington, D.C. can divine the dynamism – or lack thereof – taking place in the real world.

While Coyle concludes early on that GDP “is a measure designed for the twentieth-century economy of physical mass production,” and “not for the modern economy of rapid innovation,” her book, as the title indicates, is a somewhat fawning history of the number. It says here that Coyle’s love has blinded her. GDP has never made sense as its makeup makes plain. More on its makeup in a bit.

Concluded after the jump

The Golden Nails in the Dollar's Coffin

Mike Maloney places context around the current environment of monetary policy via the lens of history.

How the Fed Works

And its conflict of interest

Unfortunately, these bi-modal market expectation structures (my note- more explanation via the link above) are now the rule rather than the exception in this, the Golden Age of the Central Banker. Why? Because monetary policy since March, 2009 has explicitly established itself as an emergency bridge for financial markets, a bridge between the real world of an anemic, under-employed, under-utilized economy and the hoped-for world of a vibrantly growing, robust economy. On its own terms, this has been an entirely successful experiment, I suspect surpassing the wildest dreams of Bernanke et al. Stock markets have been “bridged”, reflecting what the world would look like if the global economy were off to the races, while bond markets reflect what the world actually looks like with the global economy sputtering in fits and starts. The problem today is that the experiment has been too successful. Whether you are in Europe or the US or Japan or China or wherever, the only investment questions that matter are whether central banks will continue their emergency monetary policies and what happens if the bridges are removed. These are not small, incremental policy questions. These are existential questions, reflecting binary expectations of the world with an enormous chasm in-between. With a hat tip to Milton Friedman, we are all bi-modal now.

So what’s the moral of this story for portfolio management? There are four, I believe.

In the Golden Age of the Central Banker …
1) the VIX is not a reliable measure of market complacency. Remember that the VIX itself is an implied volatility construct, built on the prices paid for options on the S&P 500 two to three months in the future. We assume that whatever the VIX is reported to be, that’s the consensus market expectation, with a lot of people holding that particular view and progressively fewer people on either side of that number. This is not necessarily the case, and when binary events raise their ugly heads it is almost certainly not the case. A low VIX level might indicate a complacent market, or it might indicate two sets of investors – one very complacent and one non-complacent – who see the world entirely differently. You have no idea what the underlying market expectations look like, and this makes all the difference in determining what the VIX means.

2) the wisdom of crowds is nonexistent. I believe in the efficiency of emergent behaviors. I believe that there is a logical dynamic process to crowd behaviors. But I also believe that crowds are extremely malleable when confronted by powerful individuals or institutions that understand the strategic interaction of crowds and make a concerted effort to master the game. There’s no inherent “wisdom” here, no emergent outcome where the crowd acts like an enormous set of parallel microprocessors to arrive at Truth with a capital T. The Common Knowledge Game is controlled by the Missionary, and our current Missionaries – central bankers, politicians, famous investors and media mouthpieces – know it.

4) I’d rather be reactive and right in my portfolio than proactive and wrong. I started this note with an acknowledgment of the weakness of risk assessments based on realized or historical volatility – it’s inherently backwards looking and you will always, no matter how finely calibrated your system, be late to respond to changing market conditions. But here’s the thing. This is what it means to be adaptive. You can’t be adaptive without something to adapt TO. Will you miss the market turns? Will you occasionally get whipsawed in your reactive process? Without a doubt. But you won’t get killed. You won’t be on the wrong side of a binary bet that you really didn’t need to make. You won’t discover that your pretty little sand box is really filled with quicksand. The Golden Age of the Central Banker is a time for survivors, not heroes. And that’s the real moral of this story.

The moral of story here is that market and expectations are manipulated and hiding the underlying risk structure. Although the article claims don't be hero- which has some merit. One can always bet against the debt/monetary structure.

Following up on yesterday’s observations about valuations in stocks, margin debt declined in April for the second consecutive month. The absolute change across both March and April is not very large, amounting to $27 billion or 5%. Total cash balances were essentially unchanged, meaning that investors retired margined positions and reduced overall leverage in retail accounts. 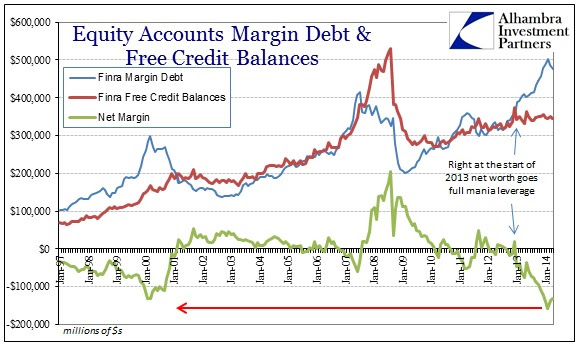 Since there was little disruption in the larger cap indices, such as the S&P 500, while smaller cap and momentum equities struggled significantly during those two months we can connect these changes in leverage to high beta investing. It would seem that small caps and “higher risk” names have attracted the most retail leverage since this latest bubble phase began.

The remaining article is available after the jump.

What Henry Hazlitt Can Teach Us About Inflation


This article is adapted from a portion of the Henry Hazlitt Memorial Lecture, delivered at the 2014 Austrian Economics Research Conference by James Grant and comes via http://davidstockmanscontracorner.com and mises.org.


Believe me, ladies and gentlemen, when you stand at the pinnacle of financial journalism, you’re standing at sea level. There are exceptions to the rule, of course. The Victorian polymath Walter Bagehot, second editor of The Economist, was one. The twentieth century Americans Garet Garrett, John Chamberlain and — my old mentor at Barron’s — Robert M. Bleiberg were others. Each brought something extraordinary to the prosaic business of

financial and economic reporting and commentary. Then there was Henry Hazlitt (1894-1991), author, critic, self-taught economist and visionary. I stand before you in the reflected glory of his reputation.
The author of Economics in One Lesson, a longtime columnist for Newsweek and an editorial writer for The New York Times in the distant, pre-Krugman era, Hazlitt waged a career-long battle against inflation. He was at it in 1946 — and he was still going strong in 1966. It may be well at this point to define terms — Hazlitt would have certainly wanted us to.

More after the jump

I hope you find this commentary from Mr. Martenson and Mr. Macleod as worthwhile as I do/did.