Read it once and read it again. Originally posted on FT.com......


By Bill Gross
Fighting central banks is dangerous, writes Bill Gross
Big Macs are out, horsemeat is in ... not in burgers perhaps, but at least in the latest headlines. What is rather evident, though, is that my favourite valuation metric for currencies – the relative pricing of Big Macs in individual countries – is being subordinated to the willingness and ability of central banks to print money.
But I get ahead of myself. Why do currencies go up and down relative to each other? Economists would argue that ever since President Richard Nixon took the dollar off the gold standard in 1971 – and certainly even before – a currency’s price was a function of several factors.

First, but not necessarily foremost, was its purchasing power parity (PPP), or its price in terms of what it could buy. Big Macs, for instance. Today, a Big Mac costs $7.84 in Norway while only $1.67 in India. If Big Macs were all the world produced or consumed, the krone should go down and the rupee should go up in order to rectify the imbalance.

Second, and third, however, are trade and investment flows between countries. Real growth, fiscal surpluses or deficits, return on investment, haven status and other factors combine to produce a flow of money into and out of a country, changing its price in the process. Add to that a speculative component, typified by George Soros’s bet against the pound in the early 1990s, and you have a decent head start in determining the value of an individual country’s currency.

Now, however, much of that is subordinated to policy makers in the form of capital controls, policy rates, and the biggest bazooka of them all – quantitative easing policies that surreptitiously increase the quantity of dollars, euros or yen relative to each other.

Newspapers, and even G20 summary statements, refer to this development as “currency wars”. The global economy, the phrase suggests, is using QE policies as currency bullets, with the central bank that can print the fastest being the ultimate winner in a race to the currency bottom.

The insinuation is undoubtedly true, although the assumption that any individual country or currency can win this war is rife with historical refutation.

Granted, in the 1930s the countries that devalued against gold first and by the most escaped the depths of depression before any of the others. Similarly, the devaluations by Asian countries against the dollar in the late 1990s rather successfully shifted growth in their favour for years to come, relative to developed countries.

But today’s quantitative easing policies – at least in G-10 countries – are not really currency wars against each other. Instead, they are rather uniform expressions of artificial asset pricing and financial repression in a rather obvious attempt to reflate their respective economies.

The “war”, if it can be labelled that, is a war against stagnant growth and high unemployment. The weapons, instead of early 20th century machine guns and devaluations against a continuing gold standard, are central bank purchases of sovereign debt – modern-day drones whose target is an artificially low interest rate that hopefully will lead to asset market appreciation and real growth in quick order.

How should an investor respond? Respect the drone, I suppose, and don’t fight the central bank in the immediate term.

In currency terms, one has only to observe the 15 per cent depreciation of the yen against the dollar and its 20 per cent depreciation versus the euro without a shot even being fired. Japan’s Prime Minister Shinzo Abe has one-upped Federal Reserve Chairman Ben Bernanke simply with a promise to print.

Instead of Big Mac prices, then, or money in/money out trade and investment flows, investors and market speculators should analyse promises, observe QE purchases as a percentage of gross domestic product or outstanding debt, and sell the most serial offender or obsessive-compulsive printer.

The yen is a first choice, the pound a close second based on incoming Bank of England governor Mark Carney’s inaugural addresses, with the euro holding up the rear. European Central Bank President Mario Draghi may promise to support the euro, but to date that hasn’t meant printing many of them.

Once an investor has picked winners and losers based upon the increasing size of a central bank’s balance sheet, however, he or she should understand that all of these QE bullets are reflationary attempts that may produce a semblance of real growth, but rather more inflation in future years.

The best line... "are we that far down the rabbit hole?".

Found this on the Chive and could not stop looking at the greatest.....

The Economics Recovery- A Novel Perspective

The video is fascinating look at the state of the last three economic recoveries and they all relate to the anemic job growth landscape. Additionally, it makes the case for a most robust educational system while also advocating, at least in my mind, the need for more disruptive innovations in the economy.

The Quality of Jobs or the Lack Thereof

This article from MISH and Marketwatch sheds some light on the quality of jobs being added. Essentially, regulations are suppressing job growth


This article originally appeared on MarketWatch under the title Jobs numbers are far worse than they look.

I selected my title from a humorous comment on MarketWatch by reader "Homer Price" who writes "Mike, What are you doing ? Trying to spoil the GREAT EMPLOYMENT news. Just wait until next year when the Unaffordable Care Act kicks in. THE BEST IS YET TO COME ............................. "

There are other interesting comments as well. Inquiring minds may wish to take a look. Now for my article ...

Economists were surprised by the massive "beat" in today's reported job numbers. The unemployment rate dropped .2 to 7.7% and the economy allegedly added 236,000 jobs.

Is that what really happened? No not really.

According to the household survey (on which the unemployment rate is based) the economy added a healthy 170,000 jobs. However, a whopping 446,000 of those jobs were part-time jobs. Simply put, the economy shed 276,000 full-time jobs.

A Gallup Survey yesterday on Jobs show the percentage of workers working part time but wanting full-time work was 10.1% in February, an increase from 9.6% in January, and the highest rate measured since January 2012.

Obamacare is in play. Recall that under Obamacare, the definition of full-time employment is 30 hours. The BLS cutoff is 34 hours. At 30 hours, companies have to pay medical benefits so they have been slashing the number of hours people work. This reduced the number of hours people worked and provided an incentive for many to take on an extra job.

We can see the effect in actual BLS data.

Multiple Jobholders as a Percent of Employed 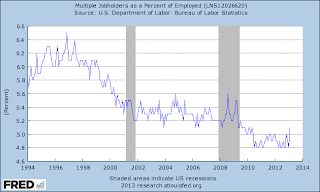 After declining for years, the percent of those working two or more jobs is again on the rise. 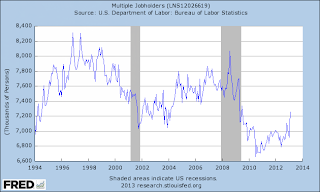 In the past month there was a surge of 679,000 in the number of people working multiple jobs. The seasonally-adjusted increase, as shown above, was 340,000.

One can look at the data two ways.

Read more at http://globaleconomicanalysis.blogspot.com/2013/03/spoiling-great-employment-news.html#hBAmXmzMPm8KSrUx.99
Posted by mchristy363 at 3:06 PM No comments:

Still Buying All That Glitters

One of data items I track is the 1-week and 2-month change in current money supply versus average historic results. Not only can this be illustrative of the the present economic environment, but it can give insight into future money supply levels. The following two charts shows the change in money, on certain weeks in the year, on weekly and 2-month basis.


What these charts show is that the period to period change in money supply has generally followed the historic seasonal patterns. If changes in money supply follow the same historic trends, money supply should increase in the weeks to come, and help lead to improvements in the timing models, as else being equal. Funny thing though, the change in the money supply has been trend since the first weeks of the year. Why? I really do not know. One would logically suppose that QE infinity would have lead to higher growth rates in money. Does this suggest a weaker overall economy or something else entirely? Either way, something to watch.

Getting back to the timing models, there really has not been much change in the model results since last week. The timing models continue to plumb the bottom of range. There was a slight tick up in the 2-month model on slightly lower expected money supply and the effects of time. Either way, the 1-year model remains in a strong buy range, and the joint 1-year/6month model indicator also points to a decent entry for gold/precious metal stocks.

The following show the timing models updated for current data along with present results.
3-Month, -1.7