• ... We now view the Fed as following a looser version of the “threshold rule” championed by Chicago Fed President Charles Evans.

• What are the thresholds? We read the committee as signaling that the federal funds rate will not rise until the unemployment rate has fallen to the 6½%-7% range. The corresponding threshold for the end of QE3 may be in the 7%-7½% range.

•These implicit commitments are undoubtedly subject to an inflation ceiling ... may be a year-on-year core PCE reading of 2½%-2¾%.

• All this is subject to change ... The flexibility to respond to such changes is a key advantage of keeping the thresholds implicit rather than explicit.

• ... Under the committee’s economic forecasts, we estimate that the funds rate would stay near zero until mid-2015, while QE3 would run through mid-2014 and total $1.2trn.

• Under our own economic forecasts, we estimate that the funds rate would stay near zero until mid-2016, while QE3 would run through mid-2015 and total just under $2trn.

• If the recovery continues to disappoint, additional steps are possible.

The keys will be to watch the unemployment and several core measures of inflation. As of August, the unemployment rate was at 8.1% - and mostly moving sideways - and core PCE for July was up 1.6% year-over-year (plenty of room to the 2½%-2¾% range).
Posted by mchristy363 at 7:38 PM No comments:


Soberlook.com posted an interesting piece two weekends ago concerning the improving health of the U.S. housing market, which can be found here. Here is an excerpt.


After a period of false starts and unproductive legislative delays, Americans have become fairly efficient at clearing out delinquent home inventory. This is what makes the US so different from Japan for example. At this pace the so-called shadow inventory drag on the housing market will diminish rapidly in the next couple of years.

What stood out to me was the following chart from J.P. Morgan showing the estimated number of homes in the shadow inventory. 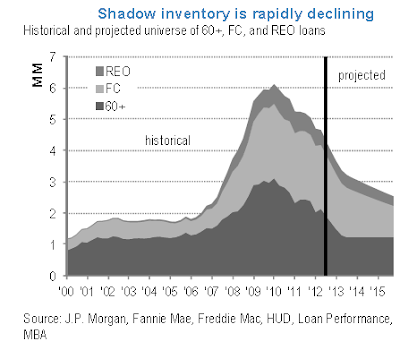 This chart made me instantly think of the following chart from CSFB, which has made the rounds for years now, showing the monthly mortgage resets from 2007 through 2016. 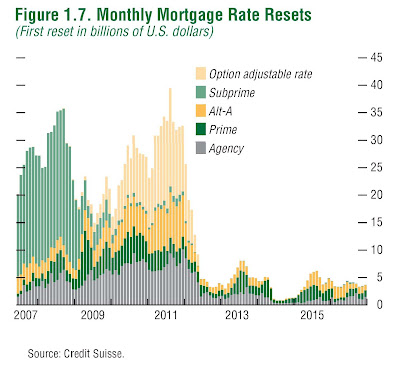 These charts say to me that the supply of distressed homes have declined significantly and will likely continue to do, albeit at a reduced rates through 2015. I think this indicates a rise in housing prices, as the supply of distressed homes is reduced. That said, I would still expect price appreciation to be anchored by the supply impact of potential sellers or homeowners current on their mortgages that are waiting for a price rebound to sell.

Dodd-Frank and the skrinking CDS market

Via soberlook.com. My first thought after reading this article is that if risk cannot mitigated and hedged through market participants, then the risk premiums will begin to work there way back into the markets. Market prices will react in kind.

The Dodd–Frank financial reform is killing the single name corporate CDS market. Liquidity in this market is drying up quickly. This is due mostly to dealers' inability to take positions when they make markets (Volcker Rule) and a cumbersome clearing process that will impose higher margin on corporate CDS for end-users (in some cases higher than the equivalent positions in corporate bonds via repo). In fact the business of basis trades - bonds vs. CDS - is no longer viable in many cases because of the margin requirements on both sides and no ability to offset.

The fact that dealers who clear CDS are not expecting this business to be profitable (see discussion) is not helping either. And single name CDS regulated by the SEC while indices such as CDX regulated by the CFTC adds to the uncertainty. At the same time margin and clearing rules differ materially among the clearinghouses (ICE, CME) and trades are not fungible between them (a trade cleared on the CME can not be offset with the opposite trade cleared via ICE). This uncertainty is adding to this decline in liquidity. The situation is so bad that an index of 100 CDS doesn't have enough liquid CDS for the index to be formed.


FT: - Indices that track the price of credit default swaps (CDS), contracts which act as insurance against a default on corporate bond payments, have become a popular way for banks and hedge funds to speculate on the creditworthiness of American companies and for bond fund managers to hedge risks in their portfolio.

But underlying CDS trading has shrivelled to such an extent that there are not enough actively traded names to make up a 100-company index.

This takes us back to the question of making the financial markets "safer". Not a single institution has ever failed due to a problem with corporate single name CDS. But banks and corporations do use this product to hedge all sorts of things - including receivables, counterparty exposure, reducing loan exposure to a single company, etc. It's not at all clear therefore how nearly eliminating this market through blunt regulation will be helpful for the financial system or the economy as a whole.
Posted by mchristy363 at 7:34 PM No comments:

The half-life of facts

Truth decay: The half-life of facts

Much of what we believe to be factual has an expiration date, but the good news is that we can see it coming

The spectrum of truth

Let's imagine that we were to line up facts on a spectrum according to how quickly they change. On the far left, we have the groups of fast-changing facts, which are constantly in flux. These would be our knowledge about what level the stock markets closed at yesterday, or predictions for weather around the globe. You might say that these areas have tiny half-lives: the length of time they stay true is very brief.
On the far right, we have the very slow-changing knowledge, featuring the facts that for all practical purposes are constant. Individually, this might include what we've learned about the number of continents on the planet, and on a group level, you might place pretty much everything the ancient Greeks wrote about geometry.
In between, we would have the groups of facts that change, but not too quickly. This knowledge might change over the course of years or decades or a single lifetime. These facts in the middle are what I refer to as "mesofacts" - and their relatively slow rate of change may mean that many people fail to acknowledge their ultimate transience and looming expiry.
Knowledge about nutrition might be considered to be one of these mesofactual areas. For example, in the US, we no longer use the four basic food groups - meats, dairy, cereals/breads, fruits/vegetables. There are now five food groups placed on a plate. Between these points there was a food pyramid that underwent multiple overhauls. We have also experienced long-term changes with regard to whether we should eat fatty foods, carbohydrates and many other things.
Another mesofactual realm might be how we are supposed to take care of babies. Each generation has a set of facts that changes, from whether babies should sleep on their backs or stomachs to whether pregnant women can safely smoke or drink alcohol.
Mesofacts are all around us, and just acknowledging their existence can be useful. After all, as studies of our perception of slow shifts in the natural world have revealed, we are often blind to gradual change (see "Too slow to see").
Of course, this doesn't mean that everything is going to be overturned. If a government-funded study promotes a certain health practice, for example, we should not immediately dismiss it as being based on one of many evanescent facts. That would be foolishly throwing the informational baby out with the bath water. But we should not be shocked if that advice is later contravened.
Fortunately, we are getting better at internalising this particular truth: many medical schools inform their students that within five years, half of what they have been taught will be wrong - and the teachers don't know which half it will be.
Thankfully, facts don't expire arbitrarily. Even though knowledge changes, the astounding thing is that it changes in a regular manner. If we recognise this, we'll be better prepared to live in the rapidly changing world around us.
Posted by mchristy363 at 7:26 PM No comments:

All that glitters- getting constructive but not there yet

Gold and precious shares appear locked in a holding pattern following the breakout that resulted from the announcement of QE3. As for the timing models, they appear to getting more constructive after topping out a 2.3 on the 6-month model and 0.66 on the 1-year model on September 17. That said, timing models remain in a range that suggests the precious metal shares will underperform the averages. Provided that the money supply is around $10.2 trillion, the 6-month timing model is 1.9.


Just as a reminder, positive results on the timing model suggest that the shares of precious metal stocks will underperform the average results over various time frames. The more positive the model results, worse the results. The sames, but opposite, is true for instance when the model is in a negative range.

The 3-month model is also positive, standing at 1.4 through the end of September.


This model also indicates underperformance of precious metal shares in future periods. I will remain on the sidelines and await a better entry point.