The long-term value portfolio lost some ground last week relative to the market, losing 2.8% versus a market loss of about 1.5%.

Since inception, the portfolio has lost2.5% versus a 0.2% decline in the S&P 500 over a similar time frame. Most of the losses on the week came from the more cyclical portions of the portfolios, which took on the chin as the market has declined.
Posted by mchristy363 at 7:37 AM No comments:

Never say coulda, shoulda, woulda is something my old football coach always said. A few weeks ago, I had debated taking back the principal in the coal stocks following their 40% run, and now those words are echoing loudly. As those stocks pulled backed, the performance of the long trading portfolio has suffered. That said, I stand by my decision, as I remain bullish on the turnaround prospects for the group and I simply cannot reconcile this with the philosophy behind the trading portfolios, namely to track the performance of any trading calls.

This compares to the 1.45% loss on the S&P 500 over the same time period. Since inception however, the portfolio's performance remains above that of the S&P 500 gaining 2.6% versus a 5.7% loss, respectively.

The short trading portfolio, in contrast, performed significantly better on the week, gaining 1.5%.

The portfolio remains exposed to the MORT Reit index, gold, oil, and the Financial sector Spider. Lastly, Express Scripts, which is a fairly new addition, has gained more than 4% since being sold short in the portfolio. The public profile on Marketocracy can be found here.

Is the Fed Gearing Up for QE4?

QE3 is barely out of the crib and this talk that once Operation Twist that the Fed will embark on QE4 or whatever new designation they want to call it. Although talk of QE4 began almost 3 seconds after QE3 was announced, the chatter began to grow following the release of the latest FOMC minutes. There are many examples of this including the following articles at Ritholtz.com and ibtimes.com, just to name two of many. In fact, interest in QE4 has been building, as exampled by indexing over at Google Trends.


However, it is easy to see where this sentiment is coming from when you Bernanke out discussing credits conditions that remain excessively tight. The following are recent comments from the Fed Chairman.

Although the decline in the number of willing and qualified potential homebuyers explains some of the contraction in mortgage lending of the past few years, I believe that tight credit nevertheless remains an important factor as well. The Federal Reserve's Senior Loan Officer Opinion Survey on Bank Lending Practices indicates that lenders began tightening mortgage credit standards in 2007 and have not significantly eased standards since. Terms and standards have tightened most for borrowers with lower credit scores and with less money available for a down payment. For example, in April nearly 60 percent of lenders reported that they would be much less likely, relative to 2006, to originate a conforming home-purchase mortgage to a borrower with a 10 percent down payment and a credit score of 620--a traditional marker for those with weaker credit histories. As a result, the share of home-purchase borrowers with credit scores below 620 has fallen from about 17 percent of borrowers at the end of 2006 to about 5 percent more recently. Lenders also appear to have pulled back on offering these borrowers loans insured by the Federal Housing Administration (FHA).

When lenders were asked why they have originated fewer mortgages, they cited a variety of concerns, starting with worries about the economy, the outlook for house prices, and their existing real estate loan exposures. They also mention increases in servicing costs and the risk of being required by government-sponsored enterprises (GSEs) to repurchase delinquent loans (so-called putback risk). Other concerns include the reduced availability of private mortgage insurance for conventional loans and some program-specific issues for FHA loans as reasons for tighter standards. Also, some evidence suggests that mortgage originations for new purchases may be constrained because of processing capacity, as high levels of refinancing have drawn on the same personnel who would otherwise be available for handling loans for purchase. Importantly, however, restrictive mortgage lending conditions do not seem to be linked to any insufficiency of bank capital or to a general unwillingness to lend.

Certainly, some tightening of credit standards was an appropriate response to the lax lending conditions that prevailed in the years leading up to the peak in house prices. Mortgage loans that were poorly underwritten or inappropriate for the borrower's circumstances ultimately had devastating consequences for many families and communities, as well as for the financial institutions themselves and the broader economy. However, it seems likely at this point that the pendulum has swung too far the other way, and that overly tight lending standards may now be preventing creditworthy borrowers from buying homes, thereby slowing the revival in housing and impeding the economic recovery.
Posted by mchristy363 at 6:46 PM No comments:

I had discussed  my outlook for gold and precious metal stocks in the latest All That Glitter Post, discussing how a lower price of gold (among other details of the precious metal timing models) would make the sector look more attractive. Knowing this, I read the following two articles attesting the latest sell off to funds and other institutional investors using gold and the precious metal complex as a source of funds.

Whether it is leveraged AAPL traders forced to sell winning collateral to meet margin calls, correlation-driven algos running stops down and up, or simply the whims of worried custodians managing risk for their clients' holdings; one thing is sure - someone (or more than one) has been a size seller of precious metals in the US-day-session-open to Europe-close period for four days in a row now...

"Gold is being seen increasingly as a source of cash," says Simon Weeks, head of precious metals at bullion bank Scotia Mocatta.

All That Glitters- Now it Gets Interesting

One thing I have to say is that I was completely blindsided with the data this week. First, the Gold Miner Index (ticker GDX) went into a tailspin. Although I warned of a potential decline in last week's post (here), I had not expected precious metal miner stocks to fall by by nearly 10% in the week. This is outlier event. Precious metal stocks have only experienced similar declines in about 3% of the weeks since the early 2000's.

Second, money supply rocketed upward, at least in terms of weekly changes in money supply since the early 1980's. (As a side note, the z-score for the most recent week- calculated using the rolling three-year average and standard deviation- was 2.38. Since the early 1980's, there were only 14 instances out of 1,500+ with a z-score over 2.3). The most recently released figures showed a gain of 1.5% or $152.9 billion of a dollar basis, settling in at $10.33. I have to admit, that I am, in a way, excited to see what comes of the money supply figures in the weeks ahead. The most recently released figures, remember money supply is reported with a two week lag- were an outlier with the growth trend for the last three years. Outliers can be a harbinger of a change in trend. That said, I still intend to use a series of linear regression models and some judgement to estimate money supply for the two weeks between the release date and the present, but will watch carefully if money supply is entering a new phase. 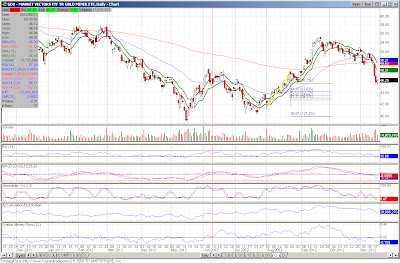 I also think the current price/volume dynamic suggests some overhang in the stocks, and that without a sign of strength any increase in price will be met with selling pressure. I am also worried about the high volume low on August 1, which in some cases can act like a magnet for stocks, funds, and other investments. I am also worried that the outlier growth in money supply renders the timing models susceptible to error.

That said, we are getting very close to a buy point here. The entry point will largely be determined by the path of money supply growth, the change in the price of gold, and the price/volume dynamics in the GDX and precious metal stocks. As for the models, despite reservation resulting from outsized gain in money supply, are in a weak buy or hold/market perform range. Here are the models as they currently stand.