An interview of Joe Salerno by Tom Woods discussing the ramifications of current monetary policy.

Hyperinflation- A History/Review By Joseph Salerno

A great overview of what is and the history of hyperinflation.

You're Not Even in the Ballpark- Inflation Misconceptions and Gold

The below video highlights many misconception concerning inflation and gold. Not from Schiff mind you, his Austrian-based arguments are spot on. Granted, I am biased.

A gold/VIX correlation, that is a new one for me. A relationship that I think I will have to test in the future, but I am fairly sure how the results will come out. That said, I have show in the past that there is no relationship between gold prices and changes in GDP or the overall stock prices. None what so ever, and I think you should seriously doubt the the talking heads perpetuating the myth of a relationship.

More so, the video highlights that the government statisticians and the Federal Reserve continue to win the day on inflation, more specifically the definition there of. Inflation is an increase in the supply of money and gold prices have, more or less, moved with the debasement of our currency. 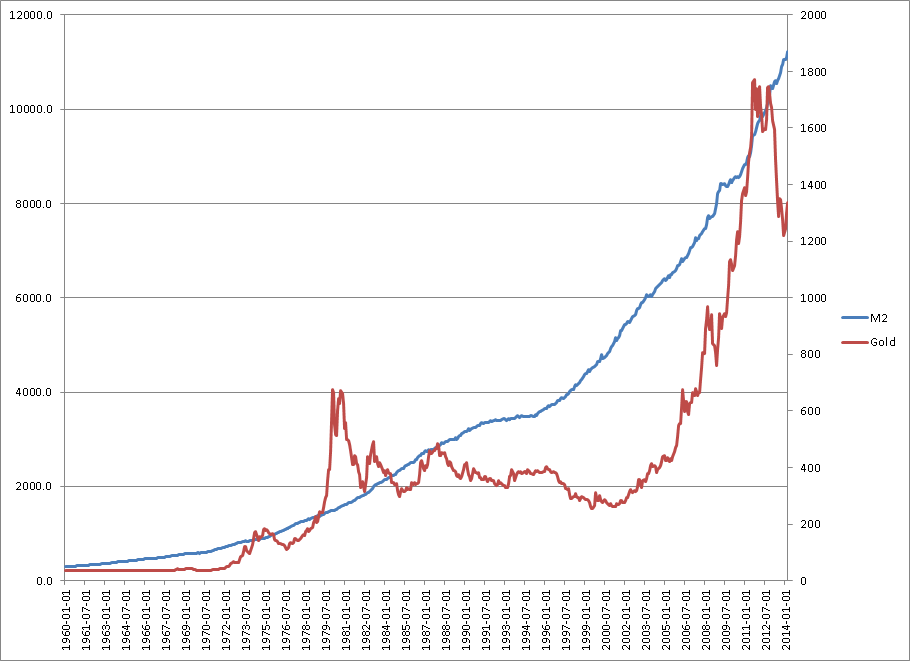 Gold vs. Base Money 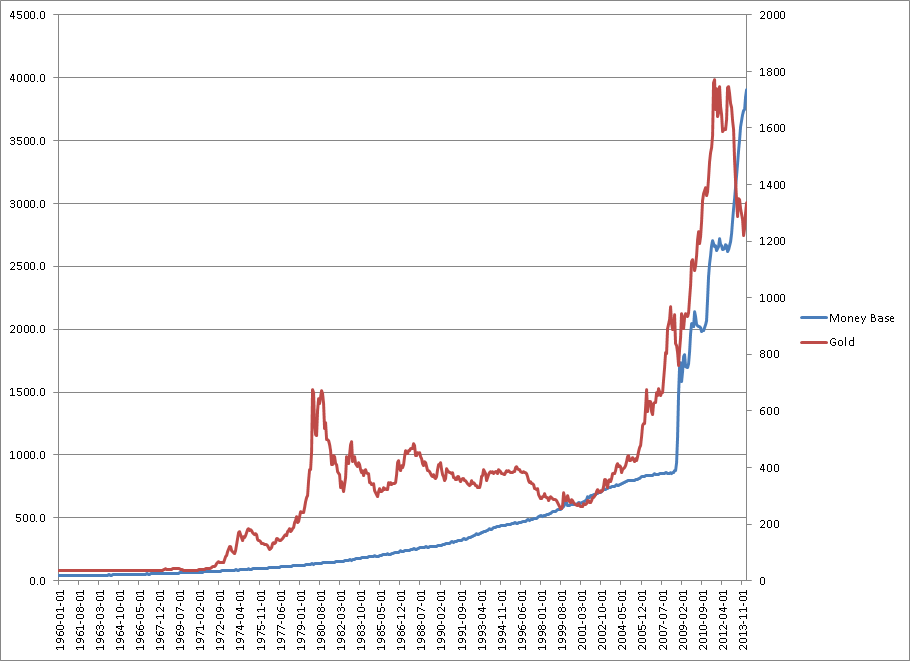 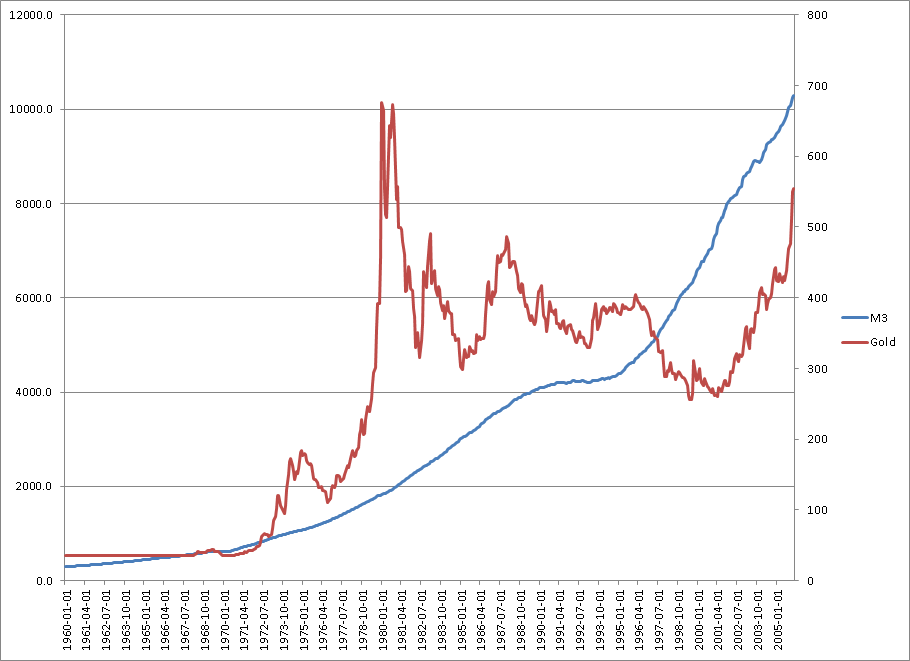 Granted, gold prices are significantly influenced by supply/demand dynamics and the run out of the ETF complex last year significantly weighed on the yellow metal. That said, the continued debasement of currencies by the world's central banks- QE or not, should help provide a floor under the price of precious metals.

I cannot say how heap enough praise on the 'money speech' prose by Rand. If only certain factions of the Federal Reserve and the banking system would understand it.

....... Potentially. That said, indications continue to point towards a wealth transfer from west to east.

For decades many of us in the hard money world have speculated that cloak and dagger activity by large financial interests has played a large role in determining performance in the gold market. The focus of this alleged manipulation is believed to be in the London market, and has been widely referred to as "The London Fix." However those who have blown the whistle have been dismissed as alarmists, gold bugs, conspiracy theorists or worse. But recent revelations should bring us closer to the truth.

On March 11, 2014, the Wall Street Journal reported that AIS Capital Management had filed a class action suit, against a number of large banks including, Barclay's PLC, Deutsche Bank, HSBC, and many others, alleging that the banks conspired to manipulate the price of gold for their own gain. This suit comes on the heels of official investigations in the UK and in Germany.

Like the London Inter Bank Offered [interest] Rate (LIBOR), the London Gold price forms a benchmark for the spot price for major gold metal transactions throughout the world. The LIBOR scandal rocked the financial world. But Germany's senior financial regulator declared possible gold manipulation as "worse than LIBOR". These words appeared to give new meaning to the word 'fix'. To get at the truth, it helps to try to follow the international flows of gold, to see who is buying, who is selling, and where the gaps may appear.

Major gold trading has long been shrouded in mystery. Despite returns required by the IMF, trading in the Far East is difficult to trace accurately. In 2009, China's central bank disclosed that its gold holdings had increased by 75 percent from 600 to 1,054 tonnes, or metric tons. According to Wikipedia, this made China the world's sixth largest holder.

Gold Field Mineral Services (GFMS) estimates the world's total gold production for 2013 was 2,982 tonnes. With an annual production of some 428 tonnes, according to Forbes Asia, China is the world's largest producer. But, like Russia, China exports no gold. If China's last three years annual assumed production is aggregated, China's 2009 declared holdings of 1054 tonnes should have increased since by some 1,284 tonnes, for a total of some 2,338 tonnes. This would make China one of the world's largest holders. But the story does not end there. China imports massive amounts mainly via Hong Kong and Shanghai.

According to Forbes Asia, the China Gold Association showed that China's gold consumption increased by 41 percent over 2012 to 1,176 tonnes in 2013. (China does not publish official numbers so discrepancies range in the hundreds of tonnes) Adding these imports to China's domestic production of 428 tonnes indicates that China accumulated at least 1,604 tonnes last year.  India's imports, as reported by Bloomberg, were 978 tonnes last year. Therefore, China and India together accumulated 2,582 tonnes or over 86 percent of total worldwide production of 2,982 tonnes.

Furthermore, combining China's aggregate domestic production and apparent imports indicates that she has now over 3,514 tonnes. Assuming the U.S. still owns all the gold held by the Fed, this would make China the world's second largest national owner.

In addition to China and India, Indonesia, Saudi Arabia and Thailand increased their gold holdings in 2013. As gold is a widely recognized representation of wealth, this represents a massive transfer of 'real' wealth from West to East.

Clearly, the massive Eastern demand for physical gold has made it much more difficult for Western central banks' mission to lower the market price of gold. That is unless Western central banks have been leasing out gold secretly to market buyers, who have been 'encouraged' politically, like Germany, not to take physical delivery?

When, at the beginning of 2013, Germany asked for the repatriation of just 300 tonnes of its holdings of 3,396 tonnes, the Fed asked for a five-year delayed delivery. By year's end, the Fed had sent Germany only 5 tonnes.

Although privately owned, partly by bankers, the Fed is audited only partially. Could it be that a large portion of the Fed's published gold holdings of 8,133.5 tonnes is now actually the property of other nations, like Germany?

Is China already the world's largest 'owner' as opposed to 'holder' of gold? If so, China, with a mature financial center in Hong Kong, already is further along the path than most have predicted towards challenging the vital reserve currency status and international credibility of the U.S. dollar.

Clearly the recent price rise in gold owes something to inflation fears, repressed interest rates and to the Ukrainian situation. In the meantime, a growing awareness of a possible serious and increasing shortage of physical gold and a decline in the power of western central banks to suppress the price, point to a resumption of the fundamental bull market in gold, despite a possible increase in fears of recession.

One More Down Leg Before A Sustainable Gold Rally- Wagner

The video from Kitco news and Wagner can be found below.


To add to the analysis, I would highlight the volume trends shown in the below 6-month chart on the GLD. 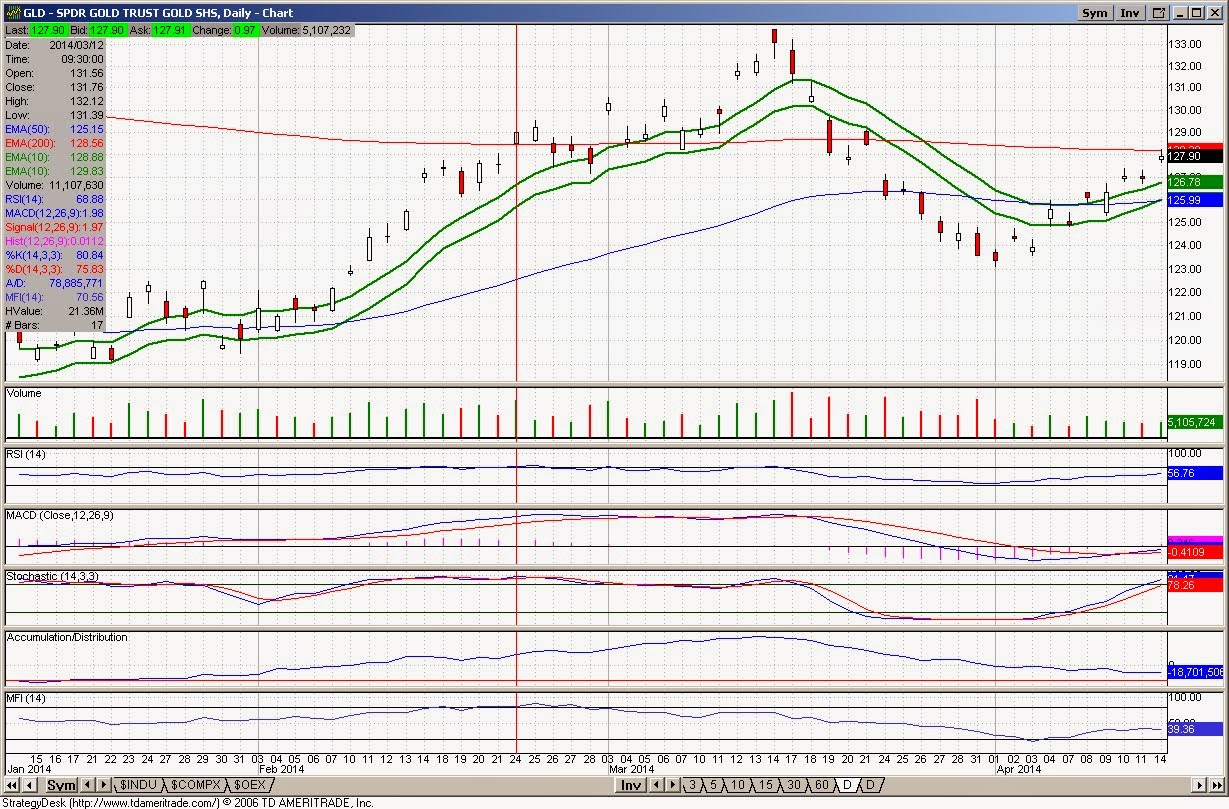 As you can seem the volume on the recent pullback, which follows the breakout of the trend Wagner described, has been waning. To me this suggests that supply dynamics on the downside has weakened and that the recent pullback is more about the weak hands being shaken out of the market versus a renewed sustainability in selling. I view this dynamic as a positive indication that the price of gold is charting out a bottom.

Much of what Mark Thornton states in the below interview is generally well known history, at least if you have studied this like I have, but it is always great to go back to the basics of blocking and tackling.