Asteroid Toutatis Caught on Video as it Rolls in Space

I think one ignores James Grant at their own peril. I will usually make it a point to read or watch columns/videos written by Grant or discussing his thoughts.With that, here is a James Grant two fer.

The first is a column posted to the CFA Institute, written by Julie Hammond, CFA, discussing Grant's view of interest rates, the Fed, etc. at the Fixed Income Management 2012 conference.

“The Fed has somehow managed to take the income out of fixed income and the yield out of high yield,” said bond market maven James Grant at the Fixed-Income Management 2012 conference held last week in San Francisco. His topics were the political and policy dimensions of interest rates and the unintended consequences of current monetary policies, lessons from history and human error that endures.

“Muscle memory should be required of all CFA candidates,” said Grant. “For 150 years interest rates have risen and fallen at generation-like intervals.” From 1861 to 1899 rates fell, and the United States enjoyed a 38-year bull market in bonds. Painfully long bear markets included the periods 1900–1920 and 1946–1981. In the current bull market — which started in 1981 and is now 32 years old — “interest rates have fallen, and they can’t get up,” Grant said. “Ain’t it grand!”

Grant gave a “cook’s tour” of the “reigning errors and foibles” that are being made in today’s bond markets and that have led us astray in committing capital.
The true problem in Grant’s opinion is not today’s debt but tomorrow’s unfunded entitlements. “To me,” said Grant, “the fiscal cliff is the Y2K of 2012. Everyone frets about it, and some have discounted it, but it is not the thing. The thing is tomorrow’s unfunded entitlements.”

Under what Grant calls “Cochrane’s postulate” he said, “The real value of government debt must equal the present value of investor expectations about the future surpluses that the government will eventually run to pay off the debt.” It makes sense, but how do we calculate the present value when there’s no free market for interest rates? Professor Alan J. Auerbach at UC Berkley and William G. Gale of the Brookings Institution in their August 2012 paper, “The Federal Budget Outlook: No News is Bad News,” made a good estimate of the real value of debt as the present value of unfunded liabilities (or the long-term “fiscal gap”) at roughly $115.5 Trillion. (For comparison the IMF calculates world GDP at about $72.5 trillion today!) Has Mr. (Bond) Market done the math? Can anyone imagine, Grant asked, a US Congress that would set in motion the realization of budgetary surpluses anywhere close to the projected budgetary shortfalls?! Yikes!

Grant closed with several observations about today’s investment environment: (1) For the first time in history, Fidelity is managing more money in bonds than equities; (2) Bernanke has 100% confidence in the Fed’s ability to reverse its radical monetary policy in a timely manner; and (3) you “just never know” in finance. Given all of this, Grant believes that US government bonds at 3% do not afford a margin of safety. Rather Grant is eyeing investments outside the bond market for income. For example, he likes those very adaptive companies selling at market multiples.

The second is an interview he conducted over at RT.com.

This comes via Sober Look- jives nicely with what I saw in some China focused funds reaching new/ or recent highs.

On page 4 of this publicly available ISI report (here) from September, there is a chart of the ISI company survey of China sales (US companies exporting to or selling in China). The comment says: "Our China Survey was unchanged this week, but is just 4 pts off the 2009 low" - as the index approached its all-time low. It never quite made it. In a remarkable turnaround, the index (according to ISI) has its biggest 3-week increase in 3 years. There is clear evidence of this improvement from companies like Yum Brands, who saw large declines in China sales that are now expected to stabilize (see Barrons post). This provides further support to the thesis that China's economic output growth has bottomed (see discussion). 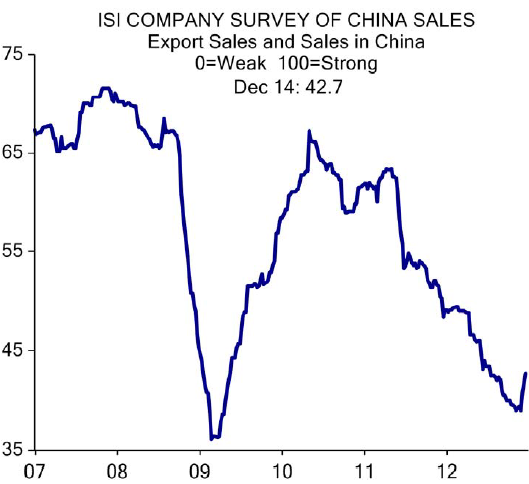 How Do Cramer's Recommendations on Mad Money Perform


Speaker John Boehner has proposed allowing tax rates to rise for the wealthiest Americans if President Barack Obama agrees to major entitlement cuts, according to several sources close to the talks.

It is the first time Boehner has offered any boost in marginal tax rates for any income group, and it would represent a major concession for the Ohio Republican. Boehner suggested hiking the Bush-era tax rates for top wage earners, including those with annual incomes of $1 million or more annually, beginning Jan. 1, two sources said.

Despite this pseudo- concession, it looks like traders (at least on Intrade) are not putting much faith in all sides reaching agreements by Dec 31. or more appropriately before Congress breaks for Christmas.

A few large-cap names made the list in Friday's trading, including ADBE and PPG. Also of note- although not one made the final cut- there were a number of China-centric funds reaching new/recent highs on somewhat higher volumes. You can find more about China here. 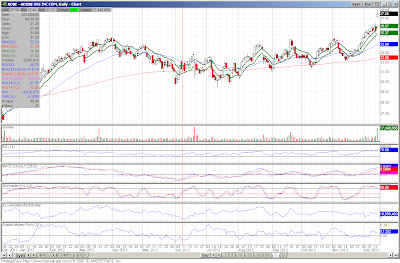 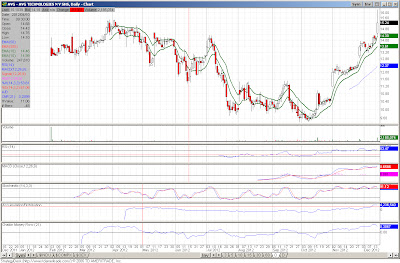 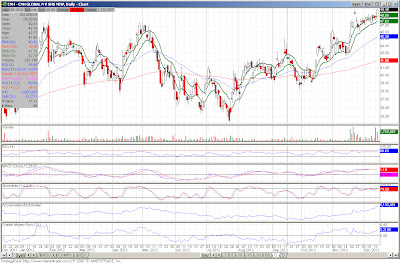 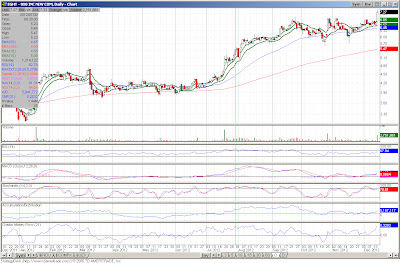 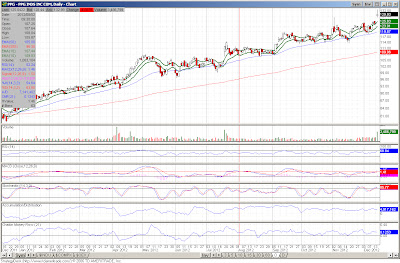 Sort of steady mix of new stocks or funds coming off the highs on volume. 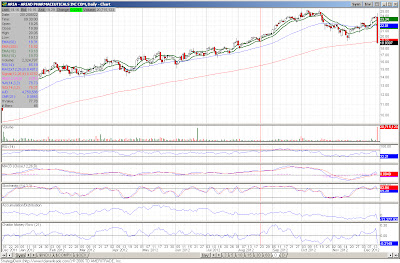 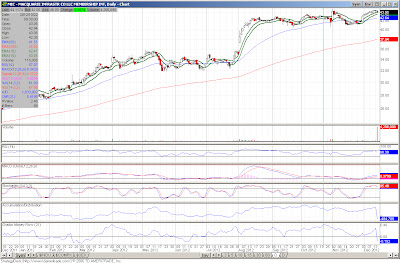 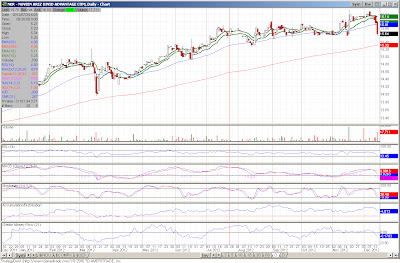 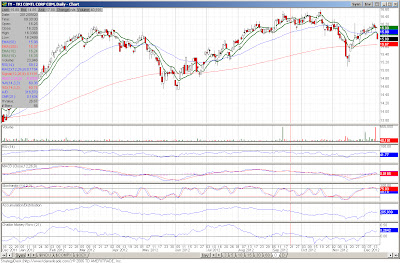 Somebody Always Knows More than You- Apple Edition

Remember when I stated that the downdraft in Apple's shares, which was attributed at the time to changes in margin requirements- is likely due to somebody knowing something..... well we are starting to see a peek at that possible something.....

First, we had Street analysts cutting their price targets due what they saw as weakness in the supply chain. For instance here and here.

Then we had reports from earlier today stating that the Chinese launch of the iPhone5 has been hitting with a thud.

Now we have word that Apple will sell the iPhone5 in Wal-Marts at a steep discount.

So this calls into question shipment volume, pricing, and margins. Never sell yourself short, but listen to what the market and the price/volume dynamics are telling you. Someone always knows more.
Posted by mchristy363 at 7:45 PM No comments:

All that that Glitters- Inching Closer to the Goal

Without getting into the numbers right away, we are getting closer to a full on buy situation in gold and precious metal shares. In fact, depending on your own portfolio construction, trading prowess, trading funds, risk taking willingness, etc. purchasing or building some small positions in gold stocks could be warranted at this juncture. For myself, I would prefer a sign of strength in either (or both) gold/GLD and the Gold Miner indexes to commit funds. This leaves me on the sidelines for the time being.

That said, we are likely to see some interesting dynamics in the weeks ahead. First off, non-seasonally adjusted money supply increased a whopping 1% for the most recently reported week. This may not seem that much but increases of 1% or more have occurred in only 8% of the weekly money supply figures since the 1980's. This, all else equal, makes gold and precious metal stocks more appealing.

More interesting is the increase in the Federal Reserve's balance sheet, up more than 4% on the week. Now before I discuss the Fed's balance sheet I should note that the database I use only goes back 5-years. Although the database only covers five-years, it encompasses the most important years in my opinion. Namely the QE years where the Fed has expanded its balance significantly. Looking back over these five years, the Fed's balance sheet has expanded by more than 2% in only 10% of the weeks examined. And yes, the 2% break point is arbitrary but by making the break point greater than 2% creates very small samples in which the subsequent data is skewed significantly by QE1 and QE2.

What I found is that following significant increases in the Fed's balance sheet there appears to be a resulting boost in money supply growth, as one would expect. However, this increase occurs with a lag and reaches a maximum in or around three months following the the initial increase. This leads me to conclude that the significant increase of the Fed's balance sheet is likely to lead to an accelerated rise in money supply in the weeks and months ahead. This analysis does not factor in the potential for further Fed balance sheet increases with QE to infinity, which may add up to $85 billion monthly. This adds a dynamic not seen in prior periods, but will likely add to money supply growth.

All in all, the expected increase in money supply should make gold stocks more attractive. However and per my modelling convention, I only look out two weeks from the reported money supply figures. Any more and the timing models I employ will need incorporate all sorts of estimated data including the size the Fed balance sheet, lagged money supply estimates, gold prices, and gold stock index prices. Any increase in estimated data points would likely add forecasting errors to the model and make the insights garnered near worthless. I would much rather use actual data, but keep in my mind the dynamics of a changing investing landscape.

Now with all that said, the timing models improved on the week and continued their move into the buy zone.
3-month model


The three month model finished the week at a -1.45. This is the strongest of the measures I employ and suggests stronger than average future performance in gold stocks.

The six month model was the weakest of the indicators at a -0.56, but in the buy zone. Similar to the one year model, the six month model's average return following similar historic occurrences outpaces the buy-and-hold. But also like the one-year model, the batting average is more inline with the buy-and-hold case. This comes with one caveat, the longer the time frame the better the results- both return and batting average. So to round the discussion back to my initial thought, committing small long-term funds to gold stocks is not out of the question, but I would not go firing it all of now. I would either wait for better model result (be it from money supply growth, lower gold prices, or some combination there in) or a sign of strength in gold/gold stocks.
Posted by mchristy363 at 7:34 PM No comments: