Trading with the VIX

I think I was a little overzealous in previous posts where I had detailed and showed charts of trading with the VIX models versus the S&P 500. Not that I do not believe in the informational value contained in the standardized VIX, but it is that I also believe the daily trading model I set up would exact too high of cost as it relates to trading.

With that said, I rejiggered the model a bit to calm the daily churn and also added another check to the , namely the trend in stock prices. Here is how the latest model pans out against the S&P 500 since early 2000. The pink line below charts the VIX-related portfolio while the blue line is the S&P 500. The performance is still impressive in my mind.

Although I continue (will continue) to make tweaks to the model, in some ways I think the point is moot. Yes, I use models in many aspects trading and investing, but I also know they are not the end all and be all. A tool is just a tool, and a hammer will not build you a house. It is all a question if the model appears robust (which I believe the standardized VIX data is) and how you interpret and use it.
Posted by mchristy363 at 3:53 AM No comments:

Coal is becoming more competitive since natural gas prices have risen closer to $4 per 1,000 cubic feet. It was below $2 earlier this year. And coal demand is expected to pick up as emerging-market economies get healthier, Sterne Agee analyst Michael S. Dudas said.

The coal industry has suffered since a boom in production and growing supplies caused the futures price of natural gas to hit a 10-year low of $1.91 per 1,000 cubic feet in April. Many utilities and other companies switched to natural gas from thermal coal for fuel.

In addition, a mild winter cut demand for electricity and heating, while the slower global economy eroded demand for steel. That hurt sales of metallurgical coal used in steelmaking.

Many coal companies in the U.S. and around the world have cut back production and shuttered mines to reduce costs. Several have taken steps to enhance their financial flexibility, Dudas said.

I will have to admit I am concerned about the near-term weather forecast for higher temperatures in the East and the recent builds of natural gas in storage.
Posted by mchristy363 at 8:05 PM No comments:

As I stated here, it is my believe that the technical setup in both gold and the gold stock indexes point to lower prices. This opinion is based on a number of indicators, the first of which is that the price of the gold/precious metal stock index (here the Market Vectors Gold Stock Index Ticker GDX, but the same setup is seen in the Junior Gold Miner Index- GDXJ and the Phily Gold/Silver Index XAU) is weaker than gold. I have shown in previous research that commodity gold performance tends to follow the performance of gold stocks. I think the weak performance in gold shares is an indicator that gold prices will be lower in due time. 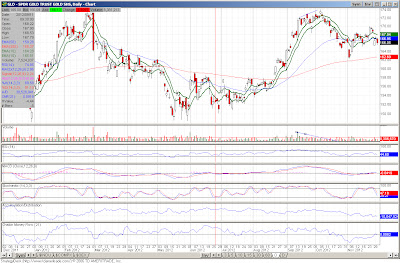 Additionally, my outlook is based on the technical setup seen in the above and below charts. First and most importantly, the rally attempt we seen in both gold and gold stocks since the beginning of November has been on weak volume characteristics. To me this suggests a lack of trader conviction or operators trying to jam prices higher to work positions. Other indicators, including the MACD, accumulation/distribution, and money flow remain weak, also suggesting the rally has little underlying strength. 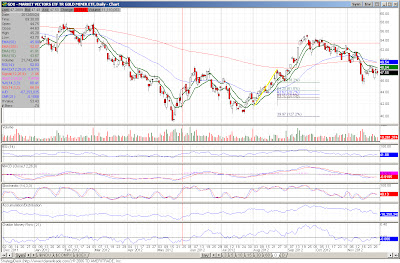 The last point I would make is highlighting in post over at Zerohedge posted earlier today....

Just like yesterday, as we head into the European close it seems someone somewhere has the dire need to reduce exposure to precious metals in a hurry... Collateral calls? Cash calls across month-end? Who knows?

Someone is selling gold and precious metals. Is this endemic or a one off situation? I have no idea, but it must be someone with large enough positions to jam the prices lower.

The timing models are showing some improvement this week, as the price of gold has declined, following the shares of gold and precious metal stocks lower. This is as money supply is stabilizing in, for now, around the $10.3 trillion for M2 money supply. The current reading on the timing models are more in a hold/weak buy mode with the 3-month model showing the most positive indicator at -0.99. The one year model estimate is currently coming in at a -0.12 while the 6-month model is slightly above the zero demarcation at 0.11. The following are the graphs of the three models vs. the Phily Gold/Silver Index through the current weak.