China cut interest rates and reduced taxes, to spur investment. The market initially reacted positively to the news, but sold off throughout the day, closing near the lows.

As for my investments, I cut my gold exposure and reduced my holdings in the TGLDX at the $64.80, taking a profit on some of the holdings I had purchased back around the $60 level. I continue to be exposed to gold and gold/silver miners, but reduced the exposure on the belief that another retest of recent lows is in order.


So, will the Fed embark on another QE program? At some point probably, but not likely in near-term


The above graphs show the annualized quarterly change in money supply (M2 and MZM) and the S&P 500. Both QE programs were announced/started when the annualized quarterly change in each respective measure was negative, or closely there to. Operation twist also started in and around M2 money supply and S&P 500 approaching negative rates. I could foresee the Fed extending operation twist, but a full QE program may only be enacted if and when the market or money supply fall significantly.

Ahead of Bernanke's congressional speech, the XUA (as of 10 am) is down 1% while both the GLD and SLV are down marginally. No further QE?

Comments on the Bernanke speech-

- The Bernanke's speech starts by focusing on job growth and states the belief that past job gains due to a "catch-up" and significant growth is needed to spark additional job growth.
- Looking fro moderate economic growth to continue (So low job growth will continue?)
- Bernanke sees resources slack, housing market woes, bank lending continue to weigh on the economy while the stronger business profits are a tailwind.
- Inflation expectations remain subdued.  (at some point, the increase in money will push inflation higher)
- The Fed is ready to act if economy weakens. (i.e. no QE right now)
- QE has lowered interest rates and raised stocks prices, thus increased the wealth effect. (Hardly. For instance, see the following....) 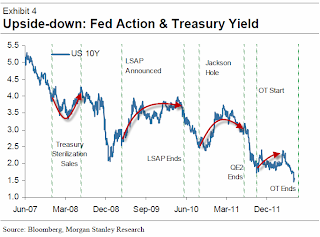 My comments- unless economic growth or expectations there of really roll over, it is unlikely we will have further QE or monetary stimulus in the short-term. With M2 and MZM still pointing to, albeit very subdued, growth, a nascent stabilization in housing, and on the looming elections, I believe the Fed will remain on the sidelines for the time being. In addition, dividend futures (as shown here http://politicalcalculations.blogspot.com/2012/06/future-changes-for-s-500.html) point to some improvement in economic growth.

My concerns about monetary stimulus following yesterday's trading may have been overblown, as the Chinese cut rates for the first time since 2008. The link to the Bloomberg article is below.

S&P futures rally on the news. Have to see how the volume comes in on the market.

Strong gains across the board with the S&P up almost 30 points to 1315, the DJIA up above 12,414 or 2.37% and the NASDAQ up 2.4%. This may be a suckers rally pulling investors/traders into the market to build more cause for downward price moves.

My portfolios were flat to marginally up despite the markets action. I may want to pare some of my gold and gold miner exposure. I have some concern that the action in the TIPS, GLD, and other rate/monetary stimulus/inflation related investments are not confirming any future Fed actions. That said, silver surged on the day, which may suggest that future stimulus is not necessarily off the table just yet.
Posted by mchristy363 at 2:33 PM No comments:

Mkt is bouncing nicely off talk of some sort of monetary stimulus- be it QE3, an extension to operation twist, purchases of mortgage bonds, or some sort of coordinated global monetary printing.

Although gold is bouncing nicely on (as show by the heavy volume on the GLD on 6/1), there does not appear to be any follow through yet and the price will start running into resistance.
Posted by mchristy363 at 9:48 AM No comments: 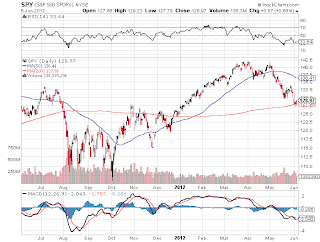 Market still looks to be in a downtrend with today's action a bounce off the 200 day ma. My coal heavy IRA was down slightly on the continued negative sentiment of the coal stocks while my 401K should be up on the gains in the market and XAU.
Posted by mchristy363 at 2:15 PM No comments: