Bubble in Gold?- A Comparison, Part 2

As a followup to my prior post, I thought it could be illustrative to show the difference between a know bubble's price action and that of gold's, again here exemplified by the GLD.Once again, I show two comparisons of the NASDAQ and gold versus their respective highs. The NASDAQ high occurring in March 2000 and gold's high in August 2011. Here however, I show the slope coefficient of the price changes over the varying time frames and using the high as the starting reference point. The first chart shows the slope of the price rise into the respective high of each asset. 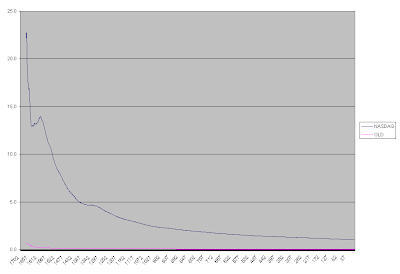 And the second chart shows you the slope of the price decline relative the same high as referenced above on each asset. 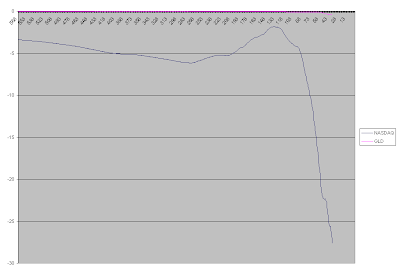 What is plainly obvious in each chart is that the slope of the price rise and decline on the NASDAQ, an obvious and well established bubble, is not even in the same ballpark as the rise and fall on the price of gold. Point being, gold was just not in a bubble.

Bubble in Gold?- A Comparison

One of my many endeavors at the moment includes the study of and what defines a bubble. Specifically, in regards to the claim that the rise in gold to $1,900 an ounce constituted a bubble and that that bubble needs to correct significantly. Maybe it is my own bias but the rise on the price gold into the 2011 correction just did not feel like a bubble. Did the price of gold get ahead of itself, in retrospect and versus various figures (like money supply growth) the answer in undoubtedly yes. But getting of itself does not in itself constitute a bubble.

The first comparison shows the price rise for each respective asset for over 1,700 trading days prior to each high-water mark. 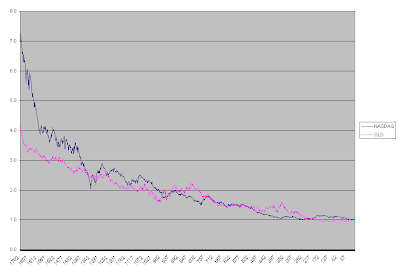 What stands out to me is not only the price rise of NASDAQ relative to the price of gold but the acceleration and duration of the ascent into the ultimate high. Gold, although gaining significantly over a seven year period, just did not experience the same degree of acceleration as seen in the NASDAQ.

You may saying that bubble hard to detect except only in hindsight, and to a certain degree that may be true. With that in mind, I show you another comparison between gold and NASDAQ. The below comparison shows the degree of the price decline in each respective asset class relative to the high for a period of over 580 trading days. 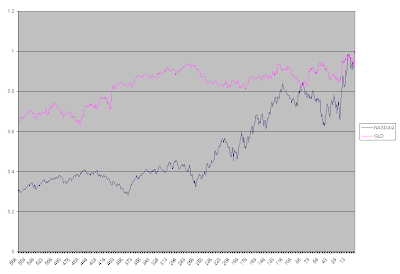 And again, the NASDAQ not only showed a larger price decline magnitude, but also a price decline that accelerated faster over a similar time frame.

Although the price of gold has corrected has corrected significantly since making its interim high in 2011, what else should we expect after a 12-year bull run. But does this make it a bubble? Not when we compare the magnitude and acceleration of the price rise and decline heading into and following the ultimate high.

It's a Mindset- Howard Marks

Some general food for thought on the investing process.

I do not necessarily agree with every commentators/researchers ideas (for instance, Schiff's comments on Gold versus Bitcoin), but I have grown to admire Ritholtz opinions one way or another.


And in my opinion, the catalyst remains money printing for as long as the eye can see. But to echo others, any asset experiencing a 12-year bull run is bound to correct.

Not a Genuine Housing Market Recovery, Its Like 2007/2008- Stockman

As outlined by Ludwig von Mises, as detailed in Murray Rothbard's book "The Mystery of Banking.