A Decade of Financial Repression?

The above graph shows the VIX-Trading portfolio (blue), the S&P 500 (green) and the NASDAQ (brown) since I began tracking in late November. I am disappointed with the results so far, but I continue to work on the standardized VIX model to develop usable trading signals, likely in conjunction with other signals and measures.
Posted by mchristy363 at 6:39 PM No comments:

Long-Trading Portfolio for the Week Ending 12/21/12

For the most recent ended week, the Long-Traded Portfolio lost 2.5% versus a gain of about 1.2% on the broader market. The loss was most attributable to the short exposure on the market and losses in the coal stock Arch Coal and Alpha Natural Resources.

The Short-Trading Portfolio lost 194 basis points in relative performance, falling by 0.8% in value for the week. Since inception however, the portfolio performance remains ahead of the S&P 500, having gained 3.2% versus a market decline of 1% over the same time period. This can be seen in the chart below showing the portfolio (blue) versus the S&P 500 (green) and the NASDAQ (brown). I am actually surprised the portfolio has been bale to hold its value in December considering the strong market rally.

The performance for the week primarily reflects slightly better prices on Apple shares and a breakout on the Financials Select Spider ETF, the later of which I may cut the losses and move into other candidates come the beginning of the week. The gold short position was the best performer on the week.
Posted by mchristy363 at 6:07 PM No comments:

I do not want to count the money before the game is done here, but the Long-Term Value portfolio is starting get some feet here. Just goes to show that sometime the best thing to do is nothing. For the week, the portfolio was in the black by 240 basis points (bps). This is better than the 117 bps gain on the S&P 500. Since inception, the portfolio has added 6.6%, ahead of the market's return of about 5% or just slightly ahead if you factor in dividends.

The above chart shows the price of the Long-term Value Portfolio (blue) S&P 500 (green) and the NASDAQ (brown) since inception.

For the week, the portfolio underperformed in primarily in financials and materials, with the former due to a lack of exposure to large money center banks. The portfolio performance was helped by the healthcare exposure that beat the S&P sector performance by 110 bps and telecom, ahead of the market telecom sector by 340 bps.
Posted by mchristy363 at 5:59 PM No comments:

Mohamed El-ErianHere is a simple way to think about the political calculus of Washington's latest twists and turns. And -- unfortunately -- it suggests that economic and market dislocations may be needed to get our politicians to cooperate and govern properly.

A major issue from day one was the extent to which the lack of trust between our political parties undermined Washington's ability to govern. (Read More: Boehner Says GOP Open to Deal; Congress Breaks)

Hoping to resolve this problem and thus deliver consensus, party leaders opted in the summer of 2011 for a very big stick: threaten the country with a major economic setback as a way to get the rank and file of both parties to cooperate.


This, of course, was the strategic underpinning of the fiscal cliff: By designing large and blunt spending cuts and tax hikes that would automatically go into effect, and thus push the country into a costly recession, political leaders hoped to impose compromise among bickering and dithering politicians - particularly among those with very different views of the past, present and future. (Read More: Plan B Would Actually Raise Taxes on Low Earners)

The stick succeeded in catalyzing serious negotiations between President Obama and House Speaker Boehner. But the stick was not big enough to overcome differences and force a cooperative outcome. And with Republicans facing the bigger risk of being blamed by the country for the failure, Speaker Boehner opted for his Plan B.

Now the situation has taken an even more interesting turn. The Speaker's inability Thursday to unite Republicans behind his plan highlights the extent to which mutual trust is also seriously lacking WITHIN the political parties - and not just between them. This meaningfully complicates the cooperative solution. (Read More: Boehner Abruptly Scraps 'Plan B' Vote in Setback)
How about the future?

Let us start with the obvious. In order to avoid a recession that would aggravate the country's unemployment problem and reignite concerns about housing and household finances, Democrats and Republicans need quickly to find a way to work together. While possible, it is hard to see how this happens endogenously. There are lots of divisions, and at many levels.

If an internal resolution mechanism is indeed lacking, than cooperation will need to be forced by an outside event. This is where economic and market volatility comes in.

Thursday's collapse of Speaker Boehner's Plan B unfortunately makes it more likely that the fiscal cliff may materialize, constituting a blow to a recovering US economy. Absent some last minute messy deal that buys a few weeks at best, that would constitute stage one.

The question about stage two is how much time do political parties then need to find a solution and avoid a bigger economic and financial implosion.

The 2008 experience with TARP - where the market and economic dislocations that followed the initial congressional vote rejection quickly forced politicians to cooperate - suggests that there is nothing like visible turmoil to get our bickering political parties to come together properly in the national interest. Let us hope that the political system responds in a similar fashion in the coming weeks, if not earlier. There is a lot at stake.
Posted by mchristy363 at 7:05 PM No comments:

Gold and the gold/precious metal stocks traded up today, as traders positioned portfolios for a higher probability that the U.S. enters into a Fiscal Cliff scenario. To some, today's trading may look positive, as gold and the related equities gained relative to the market. In my opinion, this is just a technical bounce and represents nothing more than a counter-trend move within the broader decline. Just look at the charts. 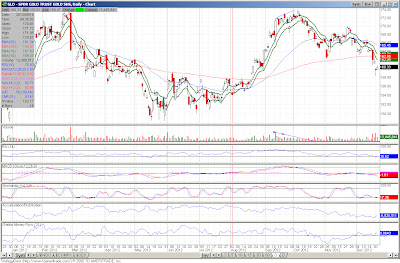 Firs, the Gold Spiders Trust (Ticker GLD), traded up marginally today. It is trading into the yesterday's gap (essentially closing it), but on much lighter shares, 13.4 million vs. 25.2 million. This tells me that there was no conviction behind the move today and lower prices are still in offing. 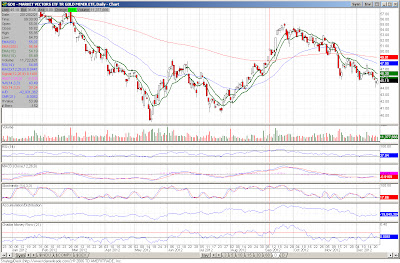 A similar trading pattern was seen on the GDX. The GDX traded up marginally on just 11.4 million shares. This is short of nearly all the days the GDX traded day since the sell-off on November 14. I believe this suggests there are sellers still in the gold miner shares, as down days in gold typically weigh on the miners. That said, I think the downside in the gold miners is limited and potentially see only $3, at most downside from current prices. In fact, the gold miners are closer to a buy than sell at this juncture.
Posted by mchristy363 at 7:00 PM No comments:

Funny if it Wasn't True

This would be funny if it a not true.

This manipulated market has become so predictable a blind, retarded monkey with a dartboard should have made enough money by now to retire 3 lifetimes over.

After last night's announcement that Congress will not address the Fiscal Cliff before the Christmas break, Intrade traders repriced their views of each. The correlation here still does not appear as tight as you would assume, provided that comments from the talking heads on TV. Traders are giving the odds of a recession at just above 20% and the chances that Congress addresses the debt ceiling before Dec 31 at just 17%.

Walking or Running in the Rain- What is Better

All that Glitters- Wait to Purchase Gold/Precious Metal Stocks

I am sticking with my call, and I am waiting it out to buy gold/precious metal stocks. Gold and the gold stock indexes are up marginally today, partially due to, in my opinion, traders positioning themselves for near-term volatility in the equities markets. I also think today's trade represents a technical trade, but I will get into that more in another post.

That stated, the timing models for the latest week came in more-or-less where I thought. The 3-month model currently sits at a -1.90 while both the 1-year and 6-month models sit in or around -1.3. I provide the updated model charts below.


It remains my opinion the price of gold will trade into, at least, the high-end of the trading range between May and July of 2012. Varying scenario analyses suggest to me that the timing models will improve to rates around the -2 point range. This is where I would consider buying gold stocks, all else equal.